“I’ve trained a lot of good ones, but she was a phenomenal horse and phenomenal to ride.” – Kelly Yates 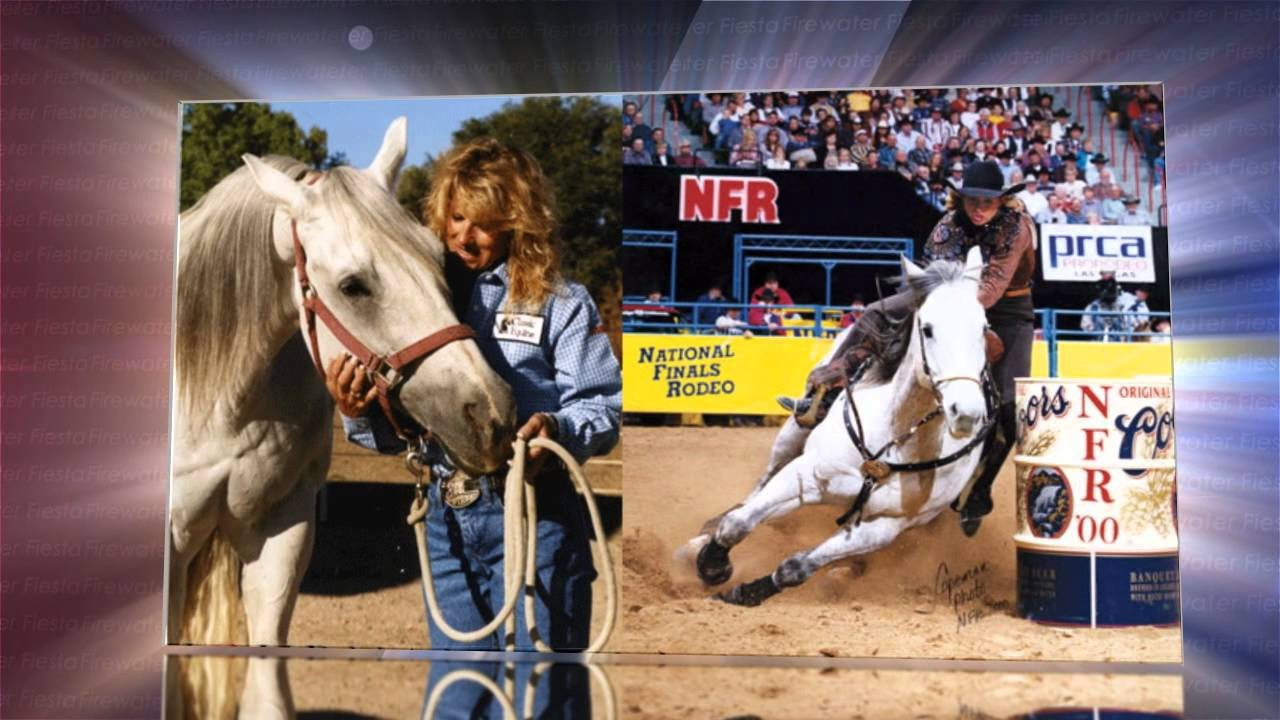 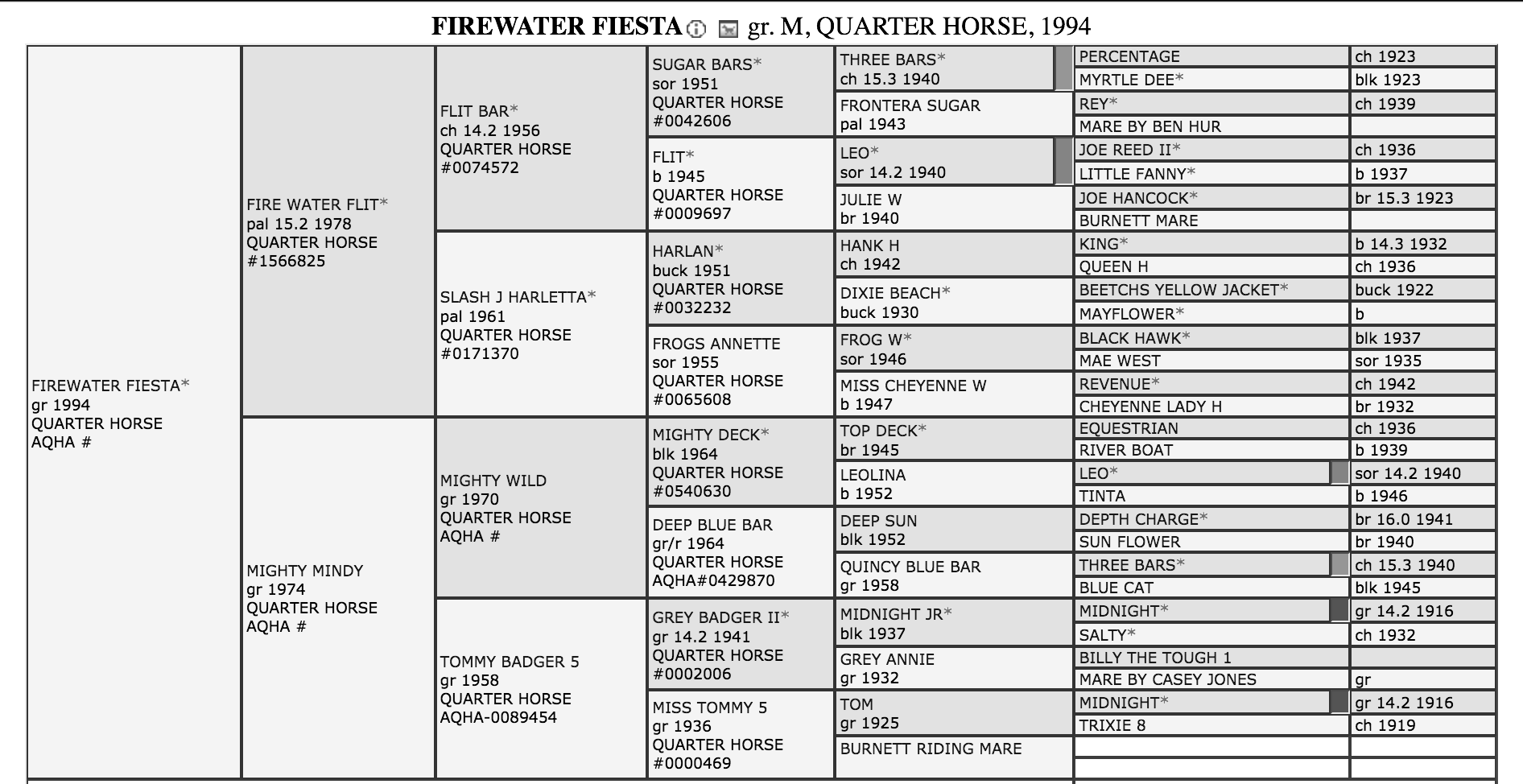 “Yates won more than $800,000 on Firewater Fiesta in rodeos, futurities and derbies in the mare’s career.”

“Legendary barrel horse and barrel horse matriarch Firewater Fiesta passed away Saturday (1/16/16) at the age of 22. Best known for her catty and consistent style around a barrel, Fiesta earned herself a Reserve World Championship PRCA/WPRA title in 2000, AQHA/PRCA Barrel Horse of the Year twice and was awarded the WPRA Horse With The Most Heart. She made it to the NFR a total of three times. Her career transition from barrel horse to broodmare occurred early, at the age of 9, after injuries plagued her from a fall in the first round of the 2001 NFR.

She was expected to win the World Championship that year. Her then trainer, jockey and owner, Kelly Yates is quoted as saying, “It didn’t just break my heart…. It broke everyone’s heart that was watching TV……She deserved to be a World Champion…..to me she is a World Champion” (www.newsok.com). Fiesta returned to the NFR in 2003, but was retired shortly after winning over $800,000.

As a broodmare she was equally successful, producing Epic Leader who’s lifetime earnings are over $168,000 in a futurity/derby time span and Fiesta Del Rey, AQHA Junior Barrels World Champion.  She has owns sons and daughters on the ground in Brazil and the United States by Dash Ta Fame, Playgun, Corona Cartel, A Streak of Fling, PYC Paint Your Wagon, Confederate Leader, Dual Rey, and Royal Shake Em, Popular Resort Figure, Iron Eyes Doc, and Hot Corona.

The 1994 gray mare by legendary barrel horse sire, Firewater Flit and out of Mighty Mindy was bred by Yates’ parents and was in barn fire as a two year old. Yates credits the trust she gained from the horse after that accident, for the strong bond between them.”

By Ed Godfrey for The Oklahoman

In 1984, the final year the National Finals Rodeo was held at the Myriad in Oklahoma City, Yates competed on rodeo’s biggest stage along with her father and brother, both team ropers.

It’s the only time a father, son and daughter have qualified in the same year for the NFR.

And in 2001, Yates was about to win her first world title in barrel racing on her wonderful horse, Firewater Fiesta, when the mare fell in the first go-round at the NFR.

“It didn’t just break my heart,” Yates recalled Wednesday at the Barrel Futurities of America competition on the Oklahoma City fairgrounds. “It broke the heart of everyone who was watching on TV.”

Yates finished as reserve champion that year and Firewater Fiesta had to miss the following year of competition. Firewater Fiesta returned to barrel racing in 2003, but injuries forced her into retirement. 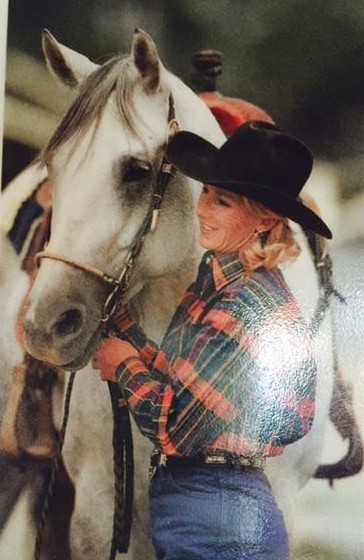 “My favorite gift was Firewater Fiesta”, “She was 5 years old, and my parents transferred her into my name and put her papers in a card and handed it to me. That was my best and favorite gift I will ever get in my life.” -Kelly Yates (Barrel Horse News)